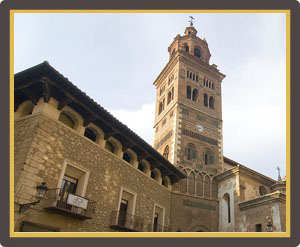 The city of Teruel occupies an isolated high plateau and bounded by relatively steep slopes, which is climbed by steep ramps, today roads, and bridges of recent times, without missing the famous Aqueduct of the Arches of the sixteenth century.

Bordered by the Turia river, it allows to see on any of its fronts a landscape according to its personality, varied and peculiar.

Even when the origins of the settlement of the Teruel vegas date back to the pre-Serran period, the first references to Teruel can be found in the Muslim chronicles of the Caliphate period, whose name at that time was Tirwal.

The foundation of the city was in the summer of 1171, in order to organize the borders around the Kingdom of Aragon.

Also the seventeenth and eighteenth centuries left a deep mark on Teruel. To the important urban remodeling, it is accompanied by the renovation of all the religious buildings and the construction of numerous palaces. A milestone that will mark the beginning of this period will be the expulsion of the Moors in the year 1610.

The modernist architecture will mark in a very special way the physiognomy that brings us to Teruel today.

All these historical manifestations and the geographical situation in which it is located will delimit the old town, which will be the heart of the life of the city even in our days.