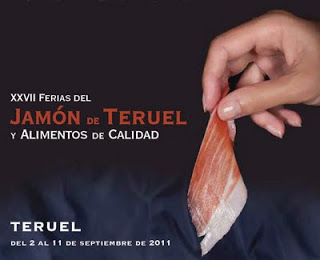 The typical and traditional Gastronomy of the region is based mainly on the products that the land gives (cereals, vegetables, fruits, etc.). In addition there are pigs, rabbits, poultry, lamb and small game. In the fish there is rather little variety: salted cod and herring (bucket sardines). Rice is quite frequent in the local kitchen.

Apart from this new kitchen, the visitor can try any of the restaurants in the area: stewed beans, meat paella, stew, migas, perolico soups, tripe, pork legs, rabbit and pickled partridge, meat stewed, or the classic grilled ternasco chops.

Pig derivatives have excellent quality locally. There are currently some 3,500 heads of pigs that guarantee a continuous supply to ham dryers and sausage factories.

The ham is the star of these products either in the classic Serrano ham or in the Teruel de Denominación de Origen. In addition, sausages packed in adobo (with oil) are obtained from the pork, as well as cured sausages (sausage, sausage, sausage, sausage and sausage), blood sausages (from rice or onion) and güeñas.
The sheep also provides the area with the excellent Ternasco de Aragón.

With regard to bakery and confectionery, it should be noted that in many towns in Spain, the breads in their different varieties, cakes, anise donuts, muffins, fine cakes, etc …

We must also mention the honey along with some wild products among which we highlight the níscalo or rebollón (Lactarius deliciosus), which so much abounds in the surroundings and that is a real delicacy in the kitchen.

MIGAS TO THE PASTORA

The crumbs are cut as thin as possible and a few drops of water are thrown, enough to be moistened, and the salt, covering them with a wet cloth and leaving them ten or twelve hours before making them. They fry the entresijo and the garlic, so that they take pleasure, adding the crumbs, that will be done to slow fire without stopping to remove them and chop them at the same time. You will have the sautéed “rebollones” (sauteed steaks) and the fried sausage, placing each one on top of the crumbs, to which they also serve as an ornament.

In the family kitchen bread is used two or three days ago, but the process of wetting is reduced to half an hour. After frying in ham bacon oil, sausage pieces and ham are fired, lightly fried and removed. They are then fried garlic and onion and some potatoes, crumbs are thrown, constantly spinning; when they are about to be made, the accompaniment of ham and chorizo ​​is incorporated. The black grape, “grenache” is an adequate complement (or another that is available).

Put a saucepan on the fire. When the oil is hot, add the ham cut into pieces. Once fried, add the bread, cut into short and very thin slices. Add the garlic, also cut into thin slices. When it is golden, it is removed from the pan and distributed in typical clay pots in equal parts. Bring the broth to the pan and, when it starts to boil, the eggs are slightly beaten. A few more seconds of boiling, using the beater, put the salt and pour into the coppers.

Once the boar is bled and well washed, the following marinade is prepared for two kilos of meat: 1 liter of water, a handful of sugar, preferably brown; a handful of salt, a carrot cut into slices, leeks, thyme, parsley, 1 clove, 8 grains of black pepper and bay leaf. This marinade should boil about ten minutes and let cool. Once cold, add two glasses of wine, from Oporto or Madeira, and put on, to marinate two kilos of boar for forty-eight hours.

To prepare it, the boar is removed, drained and dried with a cloth, placed in a pan with bacon; once fried this one, it fry slowly with 300 grams of ham, a dozen of chalotas and another one of mushrooms. Then add an onion sliced, a leek, carrot and all the vegetables of the marinade; Once the boar is browned, a glass of Madeira or Porto and a white wine are added; reduced the wine, the boar is removed.

Then half a spoonful of flour in broth is broken and added to the casserole in which the boar has been made. When it has given a few boils the sauce is passed through the Chinese and in it the wild boar, the ham, the mushrooms and the shallots, or chives are placed, so that they are made little by little. Once the sauce is tender and the boar tender, it is served by decorating it with triangles of fried bread.

Prepare the oven very hot and put the ternasco, whole or quarters, seasoned with salt and rubbed with two cloves of garlic, placed on a bed of potatoes, cut thick and sprinkled with a glass of water, in a baking sheet , sprinkling everything with the melted lard and rosemary. When it is well roasted on both sides, it is watered with a mortar and pestle, consisting of the remaining garlic, parsley, oil and wine. It can be served with escarole.

In a casserole place the chopped lamb meat, lard, oil and salt; In a separate pan, fry the green pepper, often cut and the onion and the tomatoes, one and other grated.

Fry the meat of the casserole, turning it until it browns; add three or four cloves of finely chopped garlic, a stream of white wine, the contents of the pan, red pepper in pieces and boiling water. It is kept at low heat until it cooks the meat.

LAMB TO THE SHEPHERD

Ingredients for six people: kilo and a half of lamb, 800 grams of small potatoes, peeled and whole; 1 deciliter of oil, 1 tablespoon of flour, an herb bundle: thyme, rosemary, mint, bay leaf and parsley; a quarter of milk, or half that amount of cream, 3 grams of pepper, cloves, a clove of garlic, 2 tablespoons of vinegar, half a deciliter of white wine, parsley, salt.

Cut the lamb into regular pieces, not too large, sprinkle with salt and sprinkle with this mashed: crushed in the mortar the pepper and the clove and turned into powder, add the garlic, which will also be crushed, and all with white wine.

If possible, keep the lamb in this marinade for a night; if not, two hours minimum.
A pan with oil is placed on the fire, when it has been heated, put the lamb and sauté over a low heat; the covered casserole will be kept so that the meat does not take color and the herb braid is added to the stew. When the heat has hardened the pieces of meat, sprinkle with the flour and toss the potatoes, leaving to simmer. When the sauce is consumed, milk is added. Shake the casserole to mix everything well, sprinkle with chopped parsley, rectify the salt and when the vegetables are cooked, remove from the heat. It is served in the same pan.

Chop the chicken, remove the skin to make it less greasy and sauté in a casserole with the chopped ham. Chop the onion and garlic and chop the tomatoes and peppers, removing the seeds and tails. Make a fry with all this, frying it in a separate pan. Stir well with the skimmer for about five minutes. Then add this preparation to the saucepan in which the chicken has been fried with the ham. Put it on a low heat and stir occasionally so it does not stick. Cook about half an hour, depending on the size of the chicken pieces. After 20 minutes, add the chosen wine.